It just may get you to Ireland… or possibly out of a speeding ticket.

The judge’s black robes seemed darker standing not 10 feet away. Maybe it was his shiny gavel, or his beleaguered facial expression, but I felt like the rest of my life was in his hands. I tended to exaggerate, but what 17-year-old didn’t. I was in court. I’d never been in court. This was intimidating.

As he looked over my case, I stood there motionless trying to keep myself from annoying this already annoyed man. The case it itself wasn’t anything major. I had been given a moving violation by a Police Officer for illegally passing another car on the right. It had been a small street and I thought the car was turning so I passed him slowly, but none of that mattered now. All that mattered was this judge.

“Seems like you had enough space to get around the car. Case dismissed.”

I did not blurt that out, however I did leave the small courtroom quite confidently. No fines had to be paid. No points on my license. Just…dismissed. I thought, ‘wow, that was easy.’ And it was. It was almost as if me showing up to the courtroom was the deciding factor in judgment. Whether that was really the deciding factor or not I do not know, but it definitely didn’t hurt my chances. That day, I learned a very valuable lesson. One that would help tremendously in the future.

Abu Dhabi has a bustling Irish population. I didn’t know quite how large until I got here three years ago. In that time, if you take the increase in size of the Abu Dhabi Irish Society as a measure, then the number of Irish here have nearly doubled. I’ve see that growth firsthand being a member of both the Irish Society and also it’s Gaelic Football team Na Fianna. I have been with the club since I came to the Middle East in August of 2013.

In that span I have played in countless tournaments across the Middle East – Bahrain, Doha, Dubai, Al Ain. I’ve also met some amazing men and women who have somehow accomplished the monumental task of transporting a little bit of the Emerald Isle to this Desert Oasis. One of those feats was the creation of last year’s first ever Gaelic Athletic Association World Games, held right here in Abu Dhabi. It was a huge success. So much so that the Gaelic Athletic Association, the main organizer of sports in Ireland, are set to host the second annual games this year in Dublin… and I will be there. I have the honor of carrying our club’s banner in the opening ceremony at the home of Gaelic Football – Dublin’s Croke Park. 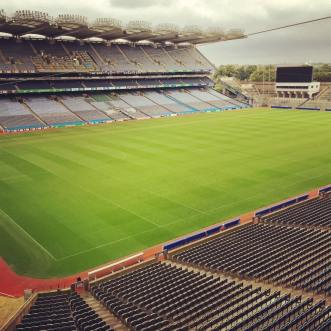 If you know nothing of Gaelic Football, no worries, for that is not the reason for which I write. All you really need to know is that Gaelic Football is an extremely popular game in Ireland, a game many Irish boys and girls grow up playing, and a game which most of these boys (and girls) aspire to one day play in Croke Park. So it is no light honor to be chosen to bear our Na Fianna banner this August 7th in Dublin.

How did all this come about?

Simply put, I showed up.

As I said, three years ago I joined Abu Dhabi’s Gaelic football team. It was actually a mistake. I was never supposed to be on the team at all. I didn’t know how to play and most of the Irish I knew were third or fourth generation Irish-Americans who were a long way from stepping off the boat. Much less Irish when compared with the gentlemen I met that first night of training.

I wanted to get connected here in Abu Dhabi so I had signed up for the Irish Society’s newsletter. In it they had said that if anyone wanted to play football come out to Zayed Sports City the following Monday night. I was a bit hesitant as I didn’t no anyone but despite that, I showed up.

Upon starting practice, I was very surprised when the other members of the team starting picking the ball up with their hands. (Umm…handball?) I quickly learned that Gaelic football was not like soccer, or American football, or anything else I’d played. But I was there, and the guys seemed like a good group, so I stayed with it. Every Monday and Wednesday, I showed up.

I practiced, they helped me, I’d make a fool out of myself, they’d help me again, I practiced some more. It went on like that for a while. Soon enough I didn’t need as much of their help and I grew to enjoy the game and the camaraderie. Most of that first season I was unsure about a lot of things. I was trying to learn the rules, the skills, the strategy, and most of all, what everyone was saying. It was as if I had unlearnt English. Despite all of the barriers, I found success.

Fast forward to June of this year.

The season had just ended, but our club’s general manager mentioned that the GAA World Games would be played in Dublin this year and that Na Fianna would be sending a team. They would have tryouts during the month of June and the best 13 lads would be chosen from those tryouts to represent the club. There would also be 5 reserve spots for non-playing emergency players.

My first thought was, “There’s no way I make that team.” But before I could even finish the thought, another one crept into my head… just show up, let God do the rest. So I did just that but the first night of practice put that mindset to the test. There were 18 spots up for grabs… 36 guys showed up for tryouts.

Not sure why I stayed for practice that night or any other practice, but I did. Every practice that was held in the month of June… I was there. Then at the end of the month, the time came for them to choose the team. I didn’t make it. I wasn’t surprised. I believed God can do some amazing things, but taking a scrawny little Irish-American who had never played the game of Gaelic football before three years ago and put him up against grown men who have played the game since they were in diapers, that would’ve been a miracle. I was actually quite content. I had showed up and given it everything I had. That was enough for me. But God had other plans.

A few days after receiving my rejection notice I got another message. The coaches had gotten together and, through their amazing mercy and grace, had decided to elect me as banner bearer for the club. I would train with the team, travel with the team, and be there for the Second Annual GAA World Games in Dublin.

I understand that being present doesn’t always lead to rewards. I understand a lot of things in this world, but what I don’t know is far greater. I don’t fully know why that judge dismissed that ticket when I was seventeen. I don’t know why a group of Irishmen welcomed me into their fold so seamlessly three years ago. And I definitely don’t know why a group of coaches awarded me with such an honor, to carry our teams banner into battle this August. I do know that none of it would have been possible if I had not… showed up.