I deeply enjoy saying that. But it’s also relevant to our story.

In September, I started working at a new school. The school had a rough past. I knew this coming in. It was recovering from a scandal in which the principal and some of the staff were involved in creating a school culture of cheating on the state’s standardized tests. In the end, teachers and the principal were fired and indicted for their roles. Worse than leaving a black mark on the Philadelphia School District and education as a whole, it destroyed any relationships the school had with the community. The trust was gone.

By the time I got to the school, the administration and its staff was making significant strides in recovering from the scandal. They had big gains in improving academically. Strong leadership and a team of dedicated teachers had helped move it in the right direction. But it was still missing a major piece of it’s community… the parents. It was one of the reason I was so excited to take the job. I saw a need and I wanted to find ways to engage the parent community.

But the question remained, how do you build back trust?

It was a simple plan. We would have a tailgate. We would invite the school community to watch the Philadelphia Eagles play football on a big screen TV and serve some hot dogs. The first time we held the tailgate we had two families show up… out of 450 students. Some would be discouraged. I was not.

Two families is more than no families. I took advantage of the families that did come and we had a blast. We played Cornhole and threw the football around. When the Eagles scored we slapped hands and cheered loudly. When they won the game we chanted the Eagles fight song. In the end, the two families left with a smile on their face and platefuls of leftover hot dogs in their hands. It was a good day.

The next time we held the tailgate we had almost 75 people attend. Word spreads when you do good things. Once again, we cheered and slapped hands and chanted for our home team. The most beautiful part of it all was seeing men and women play and cheer with other people’s children. I saw one man tossing a football happily to someone else’s child. Even better was that the boy had initially shown up to the tailgate alone.

Moment by moment we were seeing community being built. We were witnessing a change in how people saw their school. It was changing from a school they couldn’t trust to a place where they could come and enjoy a football game with friends and family. What was once a culture built on deceit was now becoming a culture of camaraderie and joy.

All it took was a football team, a big screen TV, and a few hot dogs. 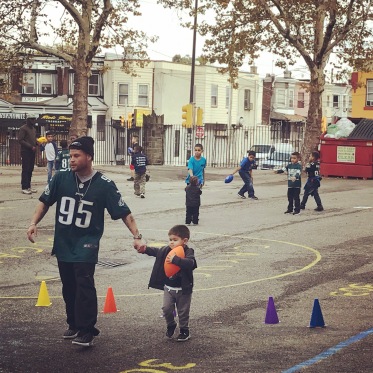